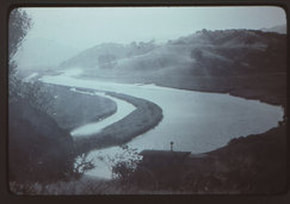 Corte Madera Creek
Up to 1800 ~ The Coast Miwok Indians occupied Ross Valley and its environs, living off the land gathering berries, seeds and acorns, hunting game and fishing the streams. There were seven mounds in what is now the Town of Ross.
1800-1830 ~ Coast Miwok culture and local population decimated by Spanish incursion and the settlement in 1817 of Mission San Raphael with its vast land holding. Reduced by disease, the survivors were moved away from their land.
1834  ~  After the Mexican Revolution of 1822, the "Land Grant" system of parceling out land comes to what we now know as Marin County.
1840 ~ Captain Juan B. R. Cooper, a sea captain from Boston, was granted "Rancho Punta de Quentin" (an 8,877 acre property) by Mexican Governor Juan Bautista Alvarado. Cooper was licensed to hunt otter, prevalent at the mouth of the Corte Madera Creek.

1848 ~ Treaty of Guadalupe Hidalgo ended the war between the United States and Mexico. California was annexed to the United States. Gold was discovered in California. Gold Fever brought thousands to California, some to Marin. This signaled the end of the "Spanish Era."
1849 ~ James Ross, a Scot from Inverness Shire, Scotland, came to California to find gold, leaving his wife, Annie, and three children waiting behind him in Australia. 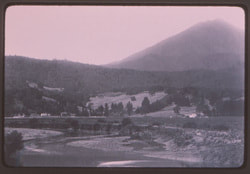 1852 ~ "Rancho Punta de Quentin" sold to Benjamin Buckelew for $50,000 in gold coin. Buckelew continued timbering and sold 20 acres to the State of California for a prison site, now San Quentin, price $10,000. The land was roughly two square leagues and ran from from Point San Quentin over the hill to San Rafael Creek northwest to Red Hill - crossing San Anselmo and Fairfax today up to the Meadow Club and south across Water District property - Bon Tempe Lake, Lake Lagunitas on south to the creek flowing by Lark Creek Inn and then north to Kentfield Corners.
Annie Ross and children arrived from Australia and joined James in San Francisco.
1857 ~ The James Ross Story ~ compiled by Carla Ehat, 1991
One day in the early 1850's, James Ross stood on "the Embarcadero" wharf that later was to bear his name, Ross Landing, chatting with Benjamin Buckelew whose Rancho he had decided to purchase. Ross realized the possibilities and saw the beauty around him. There was still much timber to be cut!
The sale included a busily working steam saw mill at Point San Quentin, all the machinery and equipment, two sloops, a yawl, plus horses, cattle, and pigs. There was continuous revenue to be made from lumber, so in 1857, for $50,000 gold coin, James Ross became the landowner of the 8,877 acre "Rancho Punte de San Quentin y Canada de San Anselmo."
He established Ross Landing (now Kentfield Corners) and ran tri-weekly packet schooners to San Francisco. Unlike thousands who came and were unsuccessful, Ross did very well; not as miner, banker, lawyer nor commission merchant, but as a wholesaler of wine and spirits. Within eight years he had become affluent enough to indulge himself, his wife and family of three children in a life connected to a "Country Squire." ﻿﻿﻿
1862 ~ James Ross died, age 50, living only five years on the "Rancho."
1863 ~ Annie Ross, the Ross' eldest daughter, married George Austin Worn.  The young couple chose a rancho site of 21 acres and built their estate, naming it "Sunnyside," site of the Marin Art and Garden Center. 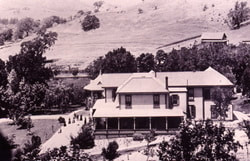 1864 ~ The first building constructed at Sunnyside was this Octagon House designed as a tank house for the well on the property. The tank was housed on the second floor while the first floor served as the newlywed's temporary dwelling until the main house was completed in 1865. The Worns were interested in horticulture and planted many lovely trees, including the magnificent Magnolia grandiflora that stands in the center of the lawn today. From their extensive travels abroad, the Worns brought back many specimen plants that still beautify the Art and Garden Center grounds.
1865 ~ The Worn family moved into their "Sunnyside" home.
1866 ~ Ross Landing School was built (site of Kentfield Fire House today). William Barber, one of the first purchasers of the Ross estate acquired 71 acres, 61 acres of which comprises "Winship Park" in Ross and the remainder, the "Barber Tract" in San Anselmo.
1870 ~ Probate proceedings started on the James Ross will. Annie Ross was forced to sell large parcels of her land to meet the stipulations of James' will.
Albert Dibblee bought 78 acres named "Fernhill" and the Ross estate. Mr. Dibblee was given permission to continue use of the name. The Branson School occupies some of that land today.
Annie Ross Worn and her four children went abroad for a two year European tour.
Livery stables were built, now the site of the Ross Garage Building.﻿﻿﻿